The ‘hen run’ returns: iconic corridor in Glasgow School of Art is reconstructed after disastrous fire 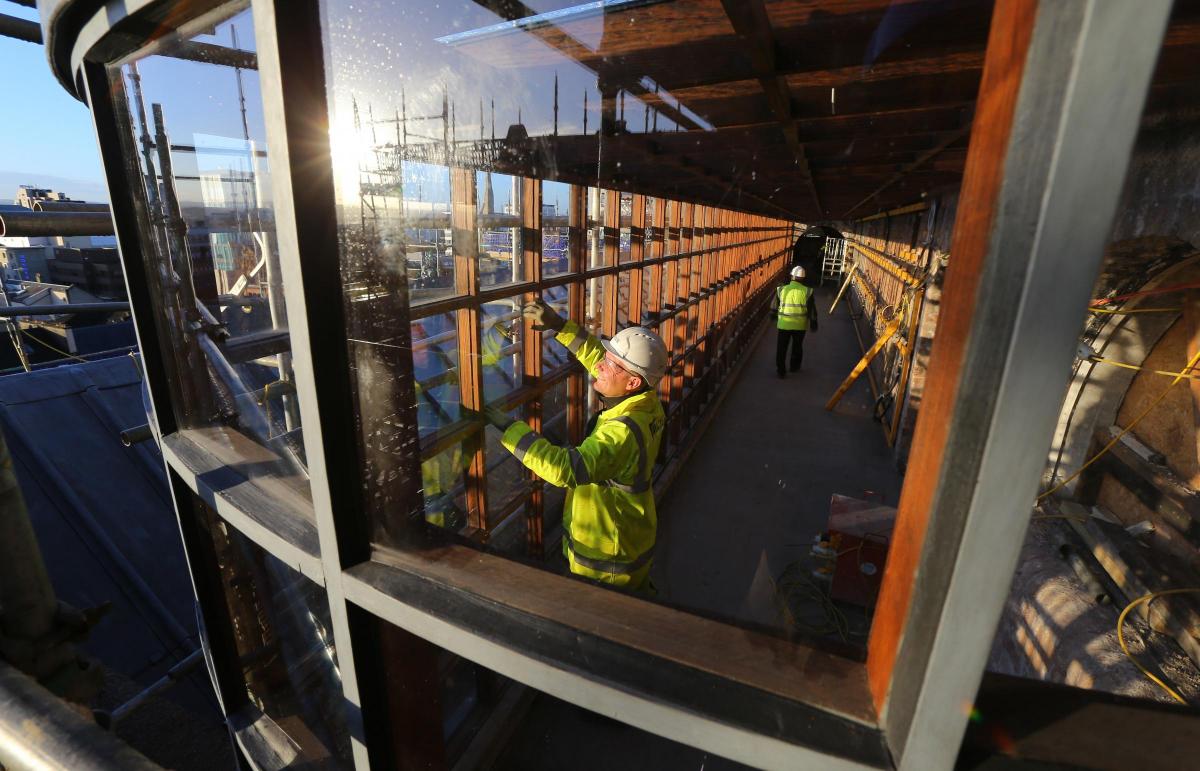 Nearly four years after its destruction in the Glasgow School of Art fire, one of the building’s most distinctive features has been brought back to life.
The glass-walled, timber-framed ‘hen run’, which connects two parts of the Mackintosh Building and provided generations of young artists with an area of stunning natural light and shade, has now been reconstructed.

Images of flames bursting from the glazed corridor were some of the most notable of the disastrous fire, which began in the building’s basement when a student’s foam sculpture caught fire.

Overlooking the south side of the city, the corridor was badly damaged in the 2014 fire from which the Mackintosh Building is making a slow but sure recovery.
The ceiling of the famous Mackintosh Library has now been put in place, and from March the interior of the library will be restored. The whole building will return to use in 2019.

The past year has seen major reconstruction take place, including a new roof, and 2018 will see the interiors fitted out and decorated, with contractors Kier working down the building from the roof to the basement.

The ‘hen run’ – whose name is believed to be related to the female students who used studios in the Mackintosh Building’s top floor – lost its glazing in the fire, although its walls and concrete floor remained.

Now the windows, with distinctive square frames on walls and the roof, have been restored back to Charles Rennie Mackintosh’s original 1910 design – the version of the hen run that was burned down dated to the 1950s.

The pitch on its glass ceiling, which was increased at some point in its history to encourage the drainage of rain water, has been returned to the slight slope originally designed by Mackintosh.

Liz Davidson, the Senior Project Manager of the Mackintosh Building Restoration, said: “The ‘hen run’ is back in existence again, and what we have already noticed is that when you get the sun at its zenith, it is casting this amazing gridwork of light on the floor and the walls.

“It is a really amazing space to be in, even now. “We have taken the roof back to its proper pitch, so it is not quite flat.”
She noted: “Nobody will remember it like this, because it had been painted white, and for a long time the two bottom panes [of the glazed wall] had been filled in, because over time they had been broken or whatever.

“So it is a very different ‘hen run’ that is coming back.” The wooden frames of the glass have been coloured with a viscous solution to make it dark, the same colour which will adorn the reconstructed library.

Ms Davidson added: “Originally, the ‘hen run’ was purely a linking corridor that Mackintosh built, it makes a flying leap around the directors’ rooms [on the top floor] and the roof of the museum. “There was no other way to connect the east and west wings, which were built ten years apart. “It was called the ‘hen run’ because the girls studios were here, at the top, in Studio 58 – that’s how the story goes, they were always rushing to class, that is the apocryphal story.”

Your ticket for the: The ‘hen run’ returns: iconic corridor in Glasgow School of Art is reconstructed after disastrous fire

The ‘hen run’ returns: iconic corridor in Glasgow School of Art is reconstructed after disastrous fire