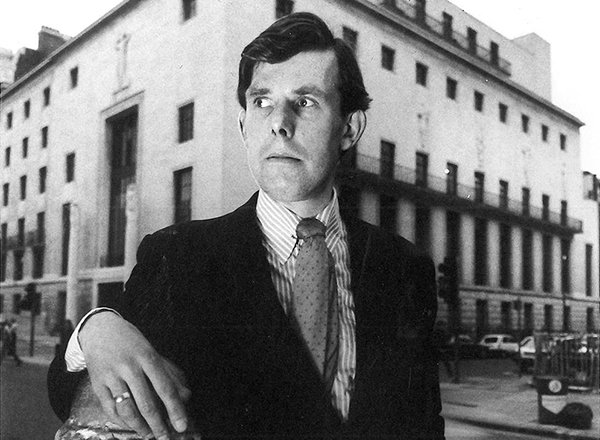 It is with great sadness that news of Gavin Stamp’s death in late December has been received by the Society. Gavin’s family have kindly passed on the details of the funeral arrangements and asked that we spread them far and wide. These are included below.

Gavin was of course the founding Chairman of the Alexander Thomson Society in 1991, a most memorable event attended by some 400 people on the evening of April 9th 1991 in Thomson’s St Vincent Street Church.

Gavin became Head of History at the Mackintosh School of Architecture in 1990, which was when I first encountered his literally lofty but friendly demeanour. He was a great character, one of a kind in fact, a very knowledgeable, unapologetically opinionated and an extremely engaging character who worked ceaselessly on his prolific research, writing, lectures and talks on all manner of architectural subjects from many periods of history. Gavin was a gifted historian, but it was as a talented journalist where his critical faculties were at their sharpest, to the great delight of some but to the chagrin of others. Gavin was never afraid to speak his mind especially where buildings were under threat, whether designed by Thomson, Gillespie, Kidd & Coia or any other important architects. He was a ceaseless campaigner for good architectural causes. His television and radio appearances revealed his unique perspicacity and insights into architecture in a most engaging fashion that made his subject matter truly accessible to all who watched and listened. It was Gavin who orchestrated the saving of Holmwood, and it was Gavin, alongside the filmmaker Murray Grigor, who curated the massively successful exhibition, Thomson – The Unknown Genius held at the Lighthouse during Glasgow’s Year of Culture in 1999.

His writings, mostly typed on one index finger as I recall, invariably exude a passionate concern and delight in architecture. 1 Moray Place, Thomson’s own house, was his family home for many years and where the early Society meetings were held under his indefatigable leadership in the most convivial surroundings.

Dr Gavin Stamp will always be a part of the Alexander Thomson Society and as was often commented upon, it was he, an Englishman, who so vigorously defended and fought for the preservation of Thomson’s architectural legacy. His presence, in the Society and the architectural world, gives us much to be grateful for.