Charles Rennie Mackintosh | The Key to a Masterpiece

In the year of the 150th anniversary of Charles Rennie Mackintosh’s birth, Lyon & Turnbull are proud to present at auction on 11th April 2018 a truly unique piece of design history – the very key used to open Mackintosh’s masterpiece The Glasgow School of Art (now the Mackintosh Building) in 1899.

The key, which has not been seen in public since the opening ceremony on 20th December 1899, was presented to Sir James King, the Lord Provost of Glasgow from 1886–9, by six year old Miss Mary Newbery, daughter of Fra Newbery, director of The Glasgow School of Art, who then performed the ceremony of unlocking the door.

As an architect and designer Charles Rennie Mackintosh is seen as a “key transitional figure from the historicism of the 19th century to the abstraction of the 20th century”. With his masterwork the new Glasgow School of Art of 1899 and 1910, became a building that has come to symbolise his achievement as an architect. It speaks to this transition, with its roots in the Scottish tradition of building but with the influences of many including English Vernacular architecture, the architecture of the Arts & Crafts Movement and the cult of Japan. 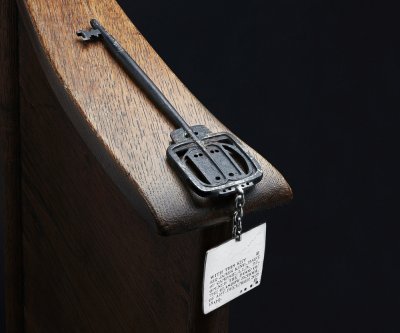 The architectural competition for a new School of Art took place in 1896 and the winning entry was Messrs. John Honeyman & Keppie. Mackintosh, a junior draughtsman at the firm, had drawn out all the plans. Building work commenced in 1897 and by December 1899 the first phase of the School had been completed. The minutes of the board of the School of Art record the elaborate preparations for the opening of the new school in the early months of 1899. After much deliberation by the board it was decided to ask Sir James King to open the school. Sir James King had been the Lord Provost of Glasgow from 1886–9 and was the chairman of the 1888 Glasgow International Exhibition.

The stage was set and a date of 20th December decided upon. The minutes go on to describe the events of the day, including the crucial moment when the key, designed by Mackintosh, opened the building;

“Representatives met in the Corporation Galleries at 2.30 o’clock – where they were received by the Chairman and Governors, and having adhibited their names to an illuminated document prepared by Miss Ann Macbeth a student of the school – were presented to the Hon the Lord Provost Samuel Chisholm. A procession was then formed – walking to the front entrance of the New Building, where a wrought iron key was presented on a white satin cushion by little Miss Mary Newbery to Sir James King Bart. of Campsie who then performed the Ceremony of unlocking the door. Miss Elsie Newbery at same time presented a bouquet to Mrs Chisholm.”

This contemporary account is almost entirely verified by the same little girl, when she gave an interview in 1985, aged 92, to the author Alistair Moffat. Unlike the Board of Governors Mary Newbery (Sturrock) remembers some of the details the officials missed.

“When The Glasgow School of Art opened in 1899 I remember a grey shady afternoon. Not a big crowd but quite an assembly of people arriving at the school and going into the first hall. After we’d been there a bit, a certain amount of talk and then we were all shooed out. Everybody stood out on the steps. Then there was another pause, then I’m afraid there were speeches…Then I was shepherded up holding a small, oblong, pale, pearly silk cushion with a silver fringe round. It was oblong so as to be suitable to hold the special key of the front door. This cushion was made by Mrs. Mackintosh and my mother.

Thinking about this lately, the formal ceremony would be arranged by my father who had a touch of pageantry. He liked formal things done properly. Then the door was unlocked and in we went. There was a feeling of cheerful achievement. The thing is the Mackintoshes were perfectionists and they couldn’t have an ordinary key. The door had a special plate and to open that interesting door of the new School of Art there had to be a proper key and that key had to be laid on a special cushion, and they couldn’t have just bought a Victorian cushion for a Mackintosh key. That’s the thing – Mackintosh wasn’t all that fussy, as they said he was, but to get things right he had to design them. I remember the key quite clearly now, shining pale in this grey afternoon when it was raining slightly, a drizzle, a real Glasgow afternoon. I was six.”

How the key was commissioned is unclear. It may be that Newbery, as the architect of the ceremony and his “touch of pageantry”, commissioned it from Mackintosh, and perhaps also paid for it. An entry in the Job Books dated 26 April 1900 notes an invoice from the blacksmith and metalworker George Adam & Son for ‘£2 10s 0d’. The entry also reads ‘Key for opening (Newbery)’, just under an entry for the same maker for the Fleming Memorial for £39.0.0, also marked ‘(Newbery)’, further suggesting his personal involvement. George Adam had also made many of the decorative metal brackets on the front of the School, the aluminium totems and the railings for the headmaster’s balcony were made by the firm. 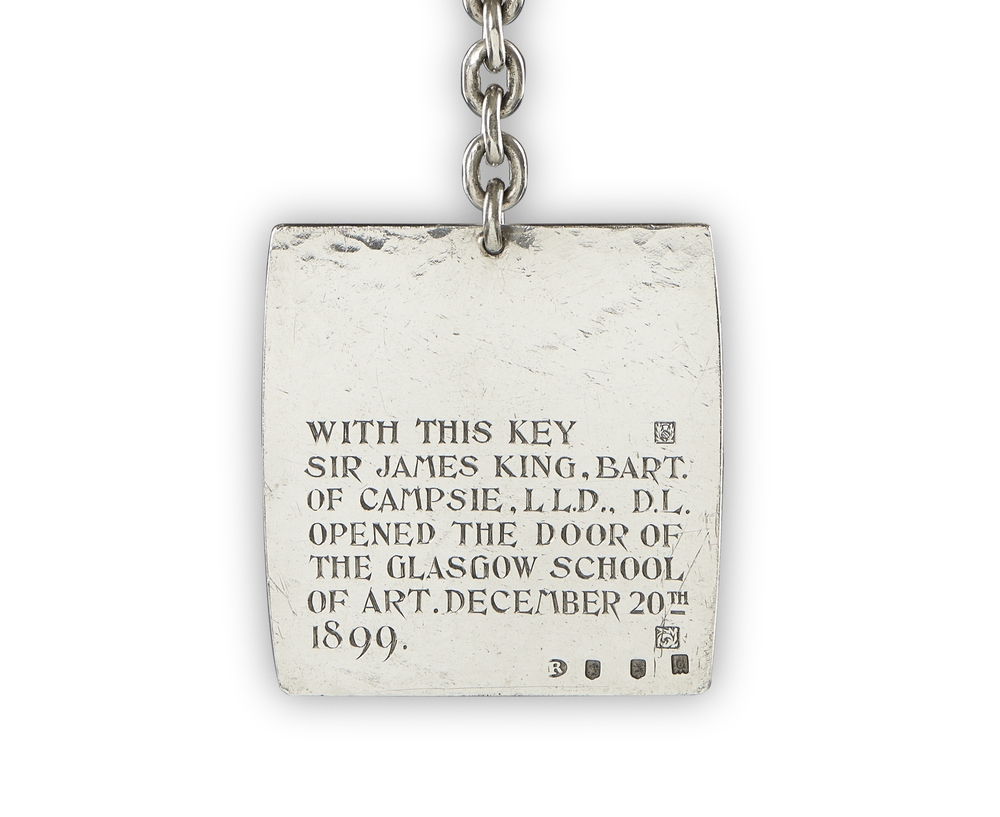 The iron key is skilfully wrought with its totemic square terminal enclosing overlaid plant motifs is pierced with a series of circular apertures and painted black. Attached to the key by a chain is a planished silver commemorative plaque, probably applied after the ceremony. It is engraved with an inscription describing the key and its part in the opening of the School. The silver is hallmarked Glasgow 1899 and the engraved lettering almost exactly matches the typeface used by the School of Art at this time, for example on the cover of its Prospectus and its Annual Report. The maker’s mark, which is mis-struck, was possibly for James Reid & Co. A silver and enamel commemorative quaich with the same maker’s mark was made for the School by Dorothy Carleton Smyth, William Armstrong Davidson and Margaret De Courcy Lewthwaite Dewar. Sold in these rooms it is now held at the Kelvingrove Museum & Art Gallery in Glasgow (Lot 52, The Taffner Collection, 7th September 2012). Also engraved on the plaque is a thistle and a leaf scroll within incused squares. 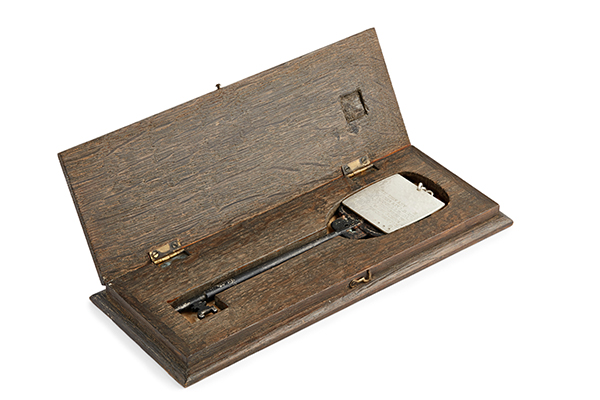 The key and its plaque are mounted in a handmade oak presentation box, with a fitted interior lined in velvet to hold the key, presumably made as a presentation to Sir James to commemorate his part in the proceedings.

Whatever the details of the key and the opening ceremony may be it is clear from all of the contemporary accounts is that Mackintosh is barely mentioned. He is certainly not credited as the architect and was not involved in any of the labyrinthine speeches and ceremony, or in any of the minutes – that fell to John Keppie as was the custom. Writing to his friend Hermann Muthesius, after the laying of the foundation stone the previous year, he bemoans his anonymity; “You must understand that for the time being I am under a cloud – as it were – although the building in Mitchell Street here was designed by me the architects are or were Messrs Honeyman & Keppie – who employ me as an assistant. You will see that is very unfortunate for me, but I hope, when brighter days come, I shall be able to work for myself entirely and claim the work as mine”. Those brighter days did come and by the time the second phase opened in 1910 he was mentioned as the architect at last and the miraculous achievement that is The Glasgow School of Art was finally his.

The key will be part of our forthcoming specialist auction of Decorative Arts: Design Since 1860 to be held on 11th April 2018 in Edinburgh. Following the sale a donation will be made by both the owner of the key and Lyon & Turnbull to The Macktintosh Campus Appeal.

Celebrating 150 Years of Design
From the English Aesthetic and Arts & Crafts movements of the late 19th century, through to Art Nouveau, Art Deco and Modernism in the 20th century, our specialist Decorative Arts: Design since 1860 auctions encompass over 150 years of design history. Over the last few years these dedicated auctions have become go-to destinations for both collectors and design aficionados from across the globe, with our 2017 auctions reaching a selling rate of over 85%.

Entries invited for the next auction until 02 March 2018. Contact a specialist to find out more.

Your ticket for the: Charles Rennie Mackintosh | The Key to a Masterpiece

Charles Rennie Mackintosh | The Key to a Masterpiece